This weekend – the 18th and 19th of February – we attended the PC GAMER Weekender with Guns of Icarus Alliance and got to exhibit our pride and joy:

END_OF_DOCUMENT_TOKEN_TO_BE_REPLACED

We’re thrilled to confirm that we will be bringing the PlayStation 4 version of Guns of Icarus Alliance to PSX 2017, taking place this weekend in Anaheim! If you plan on attending, we would love to welcome you to try a demo of the game at Booths 4 & 5.

END_OF_DOCUMENT_TOKEN_TO_BE_REPLACED

This Sunday, October 29, Guns of Icarus Online will be celebrating its 5th Anniversary!

END_OF_DOCUMENT_TOKEN_TO_BE_REPLACED

We are honored to announce that we are participating in a fundraising effort in support of the victims of the recent hurricanes.

Humans aren’t perfect – but our drive to help others in times of need, in spite of all of our differences, is one of the most amazing things about us. There are millions of people, at this exact moment, feeling the lasting impact of the recent hurricanes. We are limited in what we can do individually, but have no doubt that we can make an impact when we all work together.

END_OF_DOCUMENT_TOKEN_TO_BE_REPLACED

CoxCon and the Ps4 Reveal

It’s already been a full week since we presented Guns of Icarus Alliance at CoxCon in Telford, England. Every showcase, and convention is different so I wanted to share our adventure with all of you. If you are following us on Facebook and Twitter, you might have noticed our constant updates, pictures, posts, vlogs, and live streams!

At CoxCon 2017, we debuted the long awaited PS4 Guns of Icarus for the first time ever! We had a large booth directly between the 2 points of entrance, overlooking the entire floor, so we decided to point all the screens facing into the room, for everyone to see. The PS4 Guns of Icarus was projected onto the big display. 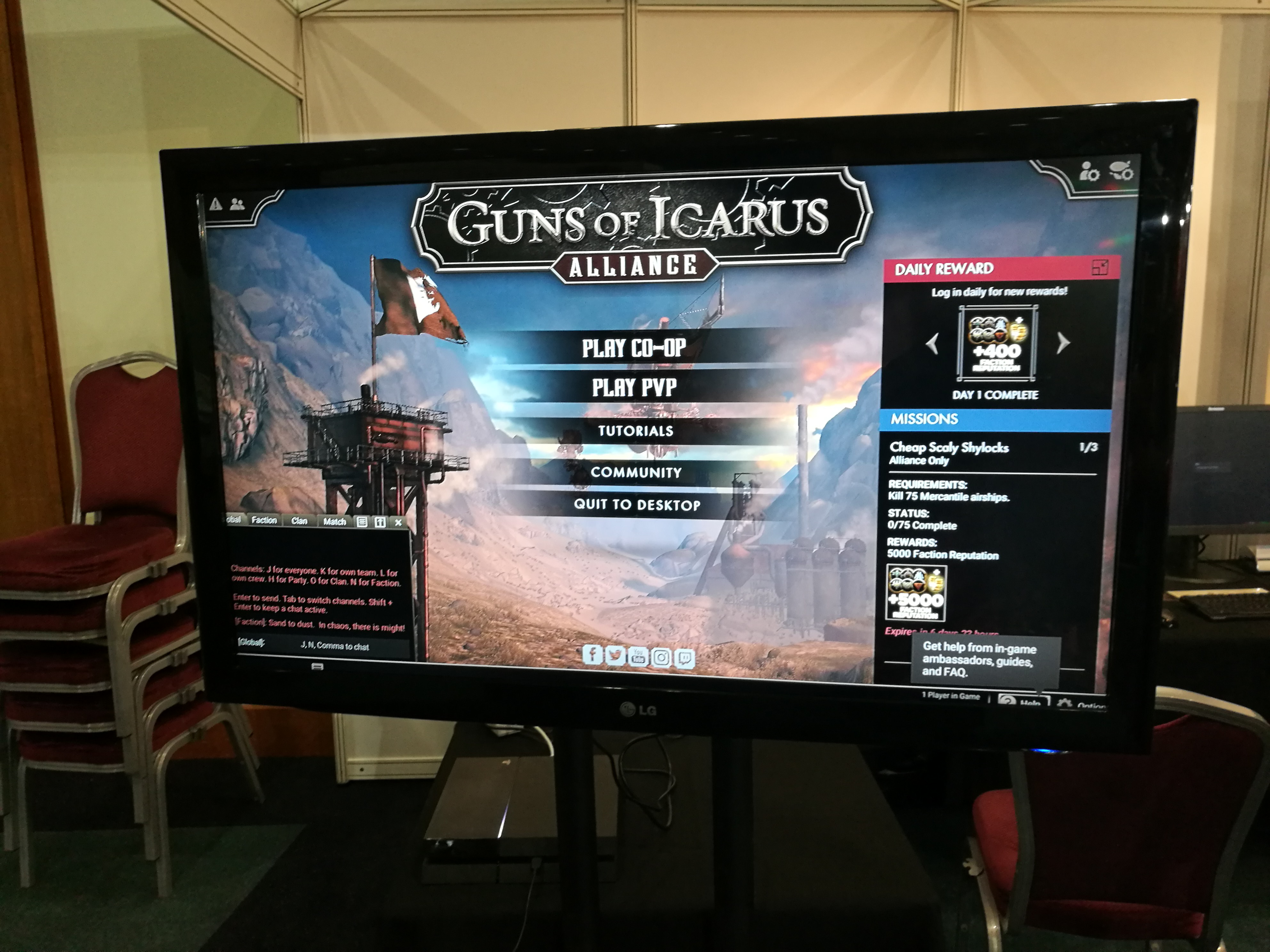 This was the first time we brought the PS4 to a convention, and we want to give a big thanks to Sony for helping us with the hardware for the demo.

It was very interesting to see the console creating its own vibe around it.

Conventions are a very stressful place, and sometimes sitting down can feel like too much of a commitment, while being handed a controller seemed much more casual.

Groups of friends would just pass around the controller letting each other play. There was so much more community to it, with a lot more talking than from PC to PC. The best part was on the last day, when we borrowed some bean bags from the communal lounge and put them in front of the PS4 Display Screen. People did not want to leave, and security had to throw them out at the end of the day.

The team started to tell those on the show floor that their online teammates were playing on other platforms like PC, Mac, and Linux. Actually being able to sit players down on a Linux, next to a Mac, next to a Windows, and next to the PS4 was a really good way to demonstrate how important accessibility is to us as developers. Not everyone can afford a gaming rig, and it became obvious that this was something people didn’t expect from a polished game like this. Our minimum system requirements are quite generous, and we got to explain to everyone just how the Unity 3D engine lets us take advantage of the gorgeous shading, without being heavy on the GPU.

For those not entirely convinced, we made sure to show them the Film Grain Filter. Everyone’s gaming experience is important to us, and this feature is perfect for bringing back a little flair without taxing your machine.

We got to explain how Guns of Icarus Online was the game we were able to make in 2012, and how we have grown as people and developers since. How we remade the entire game, added all the multicultural steampunk elements like factions, a living, breathing MMO Risk world map that is impacted by every ounce of effort the players are putting into it live, a unique AI that is able to learn and anticipate moves, keeping each and every game unique, and building game modes with the aid of our inventive community.

And that as a thank you for helping us create Guns of Icarus Alliance, we made sure that everyone who invested in our previous game is able to log into GOIA by combining the launchers and giving all of you free access to the updated PvP.

Sights & Sounds at the Booth

We had great turnouts at our booth all throughout the con.  Additionally, HyperX hosted an event where they sponsored 4 rounds of Cloud Stinger Headsets for Guns of Icarus Alliance competitions, which were announced on their main stage. We played 2 Sunset Blitz Speed Runs. Almost everyone queueing up were first time players. Not playing against each other, but against time itself seemed to be less intimidating when trying a new game. The teams were very focused on communicating with each other, and hearing the other side advancing in waves made it even more competitive. Ben was shoutcasting the Speed Runs, which attracted people from all over to crowd around the screens and join in; picking sides, cheering their teams on, identifying with their victories.

For Day 2, Sky Captain Maximilian Valentine, Captain of the Sky (a.k.a. Jesse Cox), was recruiting 3 brave individuals to crew on his Goldfish, and challenging a fearless crew of 4 in an epic PvP 1v1 showdown. Hundreds of people were queueing for their chance to watch the fight, and hear the smack talk that we transmitted across 3 big TVS showing the map movements and each ship.

It was an amazing fight to watch, and if you missed it, fear not; This was live streamed on Facebook and you can watch it here:

Even during Jesse Cox’s stream our booth was very busy. It was generally so busy between Panels that every single PC provided on the HyperX Stage was running Guns of Icarus Alliance with people who didn’t make it into the booth. 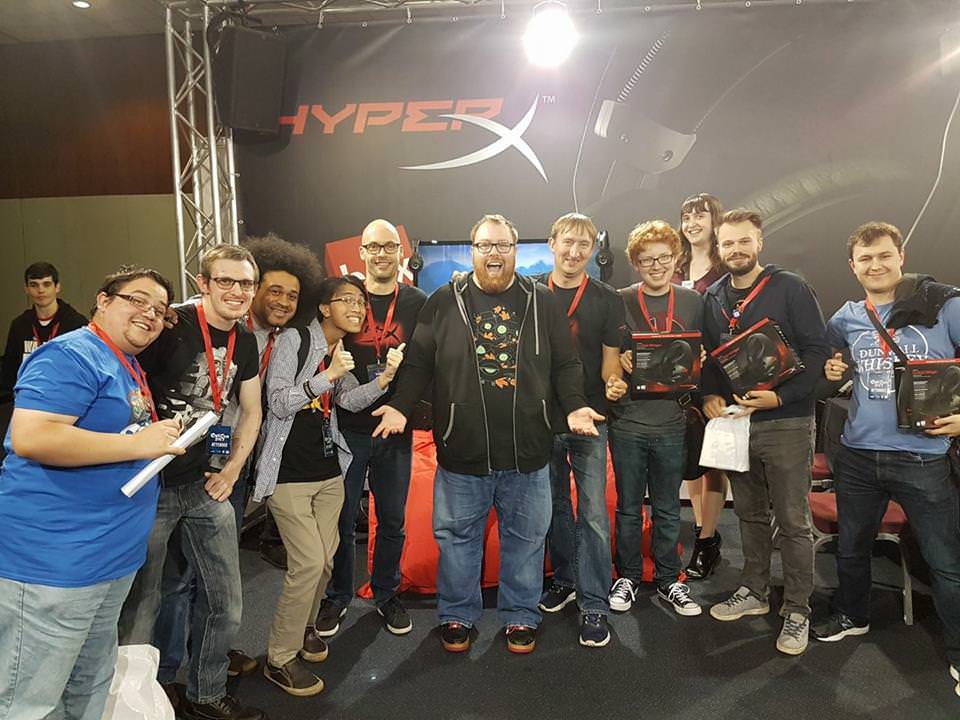 CoxCon is all about The Queue™.
Whenever we noticed traffic was slower, we ran along the long queues handing out GOIA goodies, so Wendy gave out trading cards yelling “Guns of Icarus Alliance released on PC, Mac, Linux, and soon PS4! It’s all about steampunk airships, huge turret guns, and the ultimate teamwork! Look how pretty! You get a Junker! You get the Judgement,..”

We figured that some merch would sweeten the waiting process, and a lot of you came by after to say hello and try the game! So YAY!

Besides the almighty Jesse Cox, we also ran into lots of other babes!

Barry and Sips from the Yogscast had their booth on the other side of HyperX Stage facing us, and were drawn to the giant glimmering PS4 screen. 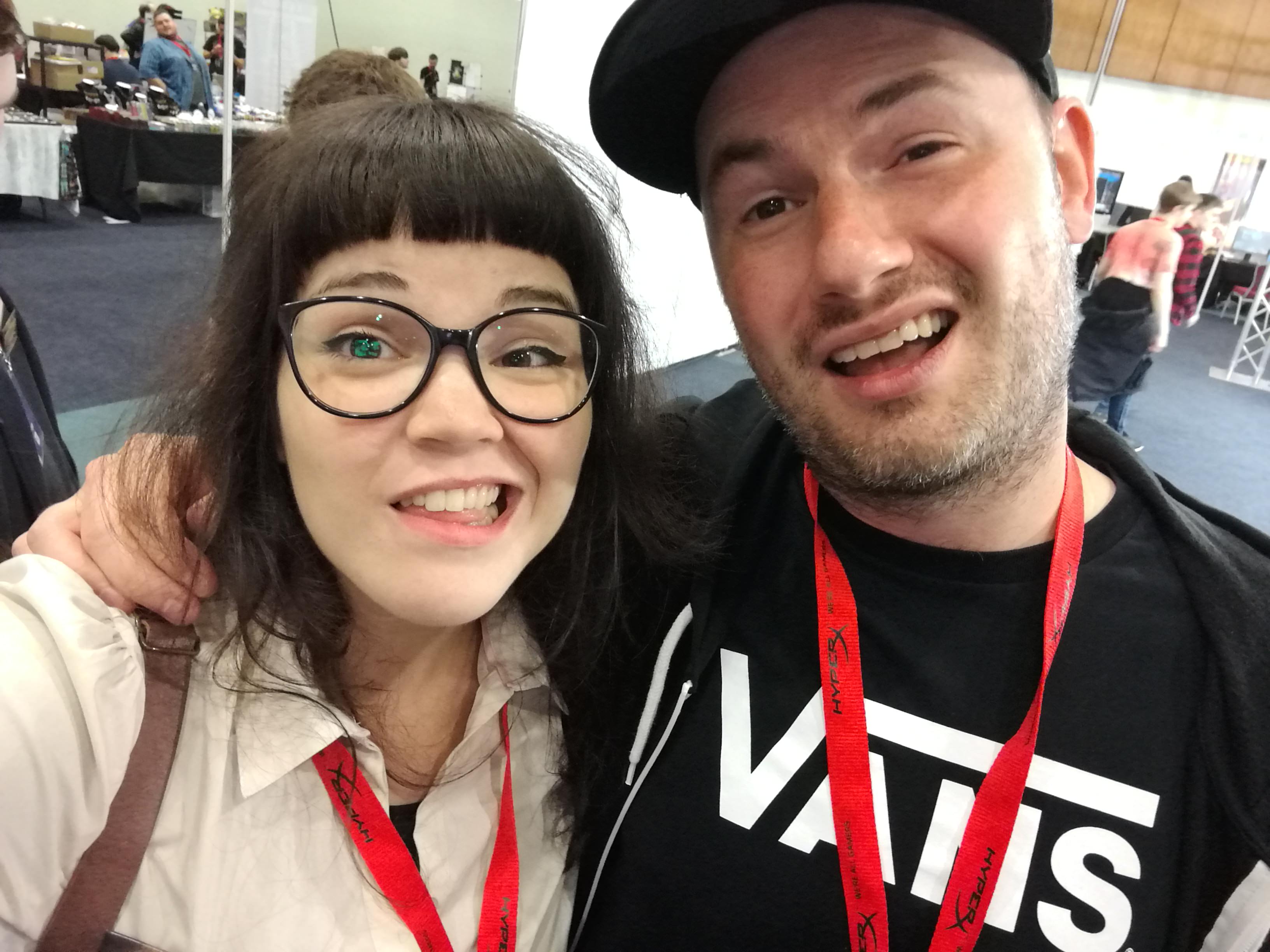 Dodger, whom we invited to play Guns of Icarus Alliance, is considering doing a girls’ dev stream with Liz and Wendy! 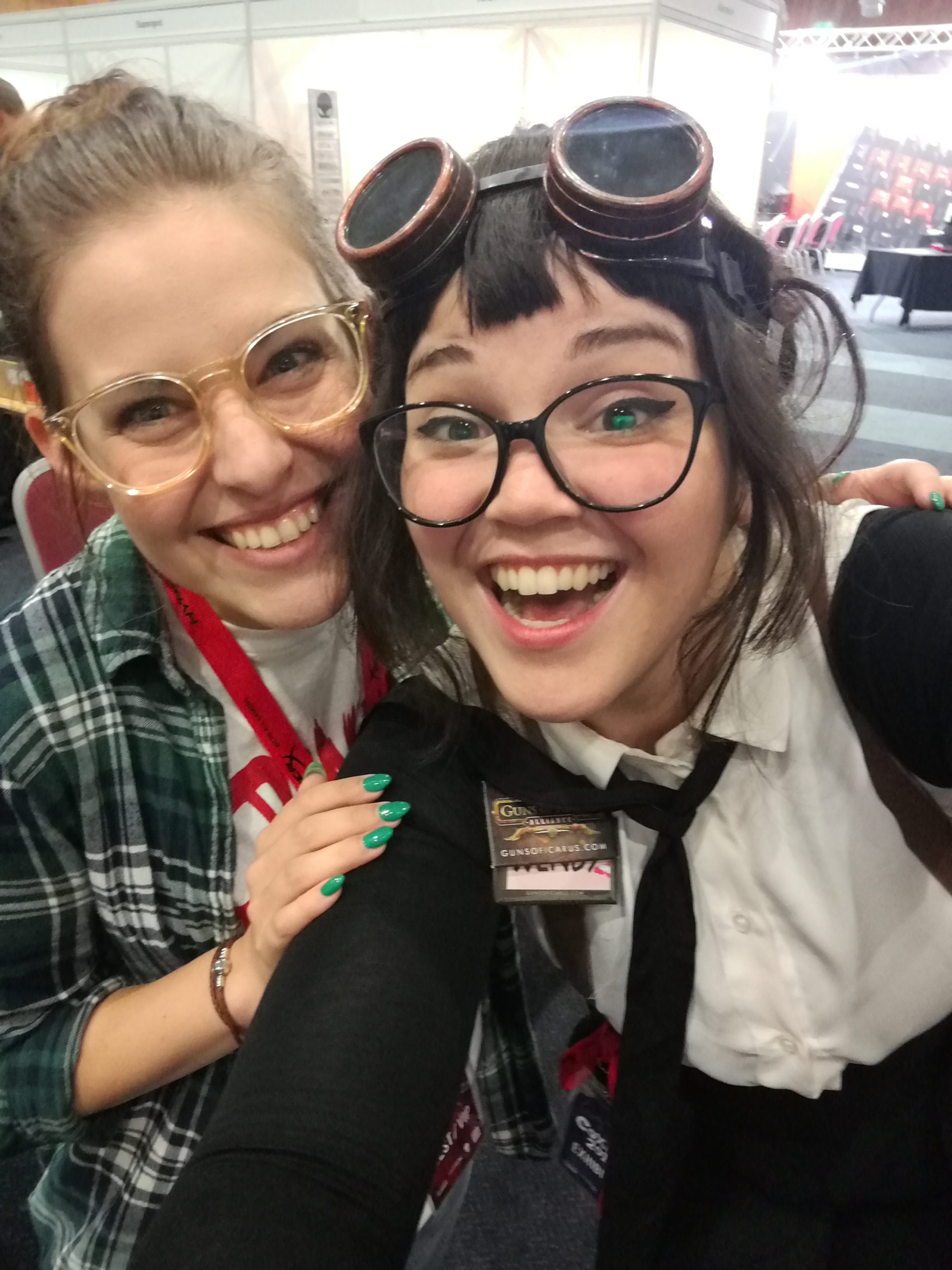 We can’t thank Genna Bain and TotalBiscuit enough for standing up for transwomen. We are a team built on diversity, and what they are doing is really inspiring. While treatment still occupies a lot of his time, we expressed our desire to get TotalBiscuit back in the skies and show him how far we’ve come. 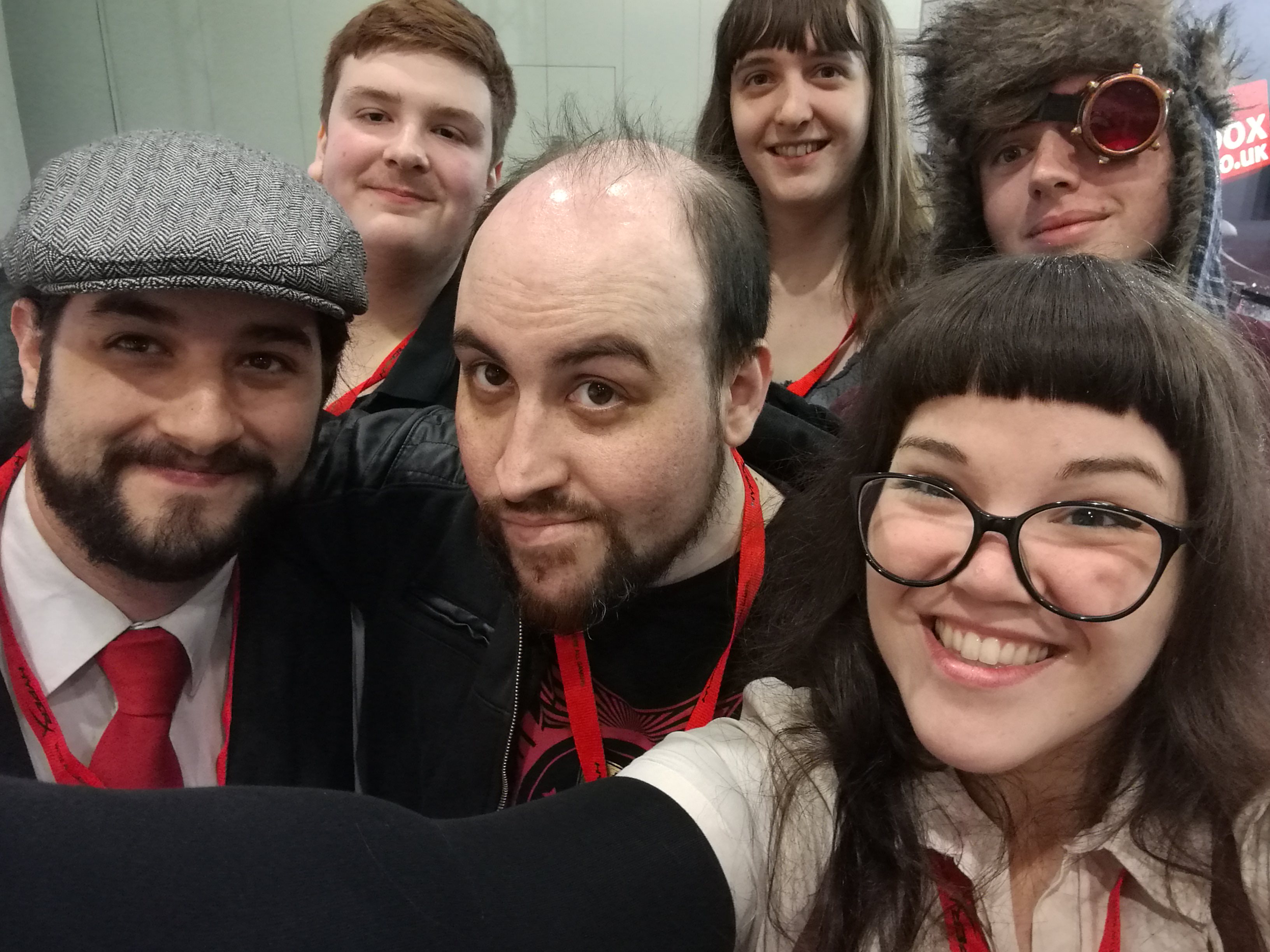 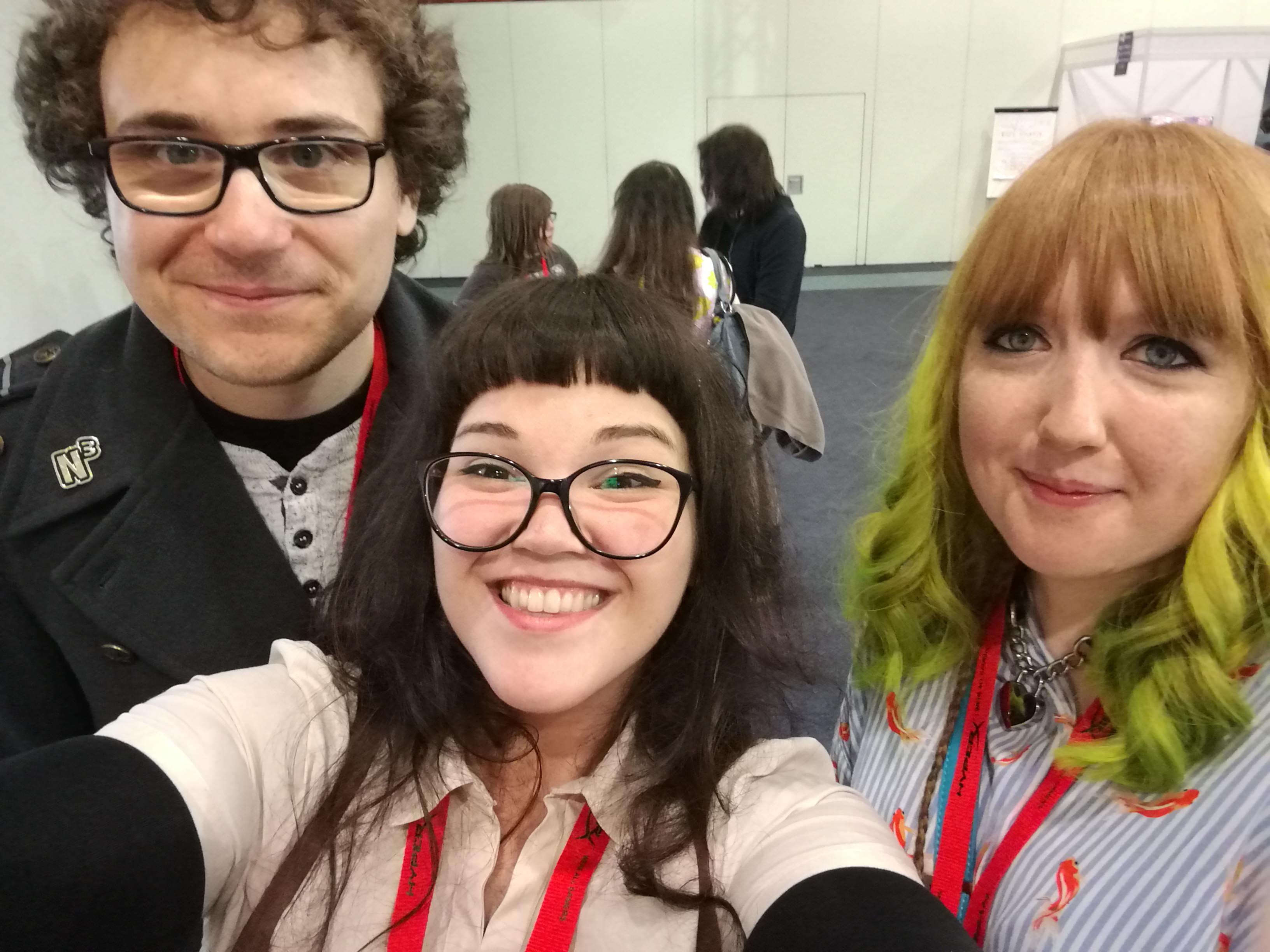 We also ran into a hand full of small streamers: We love you and support you!

If you saw us at CoxCon, do not hesitate to reach out, so we can get you sorted.

Teamwork Made It All Possible

Muse Developer and representative Wendy was drawing in people with her infectious passion.
Community treasures Zyem and Crusty were helping people with navigating the PS4 build.
Josie did factual explanations of the computer version.
And former MLG player Ben created a really good mood, almost shout casting what people were doing and what was happening, making sure that things stayed exciting and people knew what was going on!

With our booth setup, in addition to our array of PS4, PCs, and displays, we also dedicated an entire table to GOIA fan merch, like pins and trading cards that attracted a lot of attention by itself! Thanks to Zyem, the booth looked more professional than ever before – clean, elegant, and running 2 additional emergency machines hidden neatly underneath the table :D.
And while Josie’s work laptop and Ben’s old MacBook weren’t part of our original plan, they turned out to go quite well as live cross-platform set up, especially accompanied with the live presentation of the PS4 build at a con!

This CoxCon has been the smoothest and most organised convention we have ever been a part of. We had time to talk to EVERYONE that even glanced at the booth. HyperX were incredibly generous in their support for our players, even giving out an extra round of their Cloud Stinger headsets. 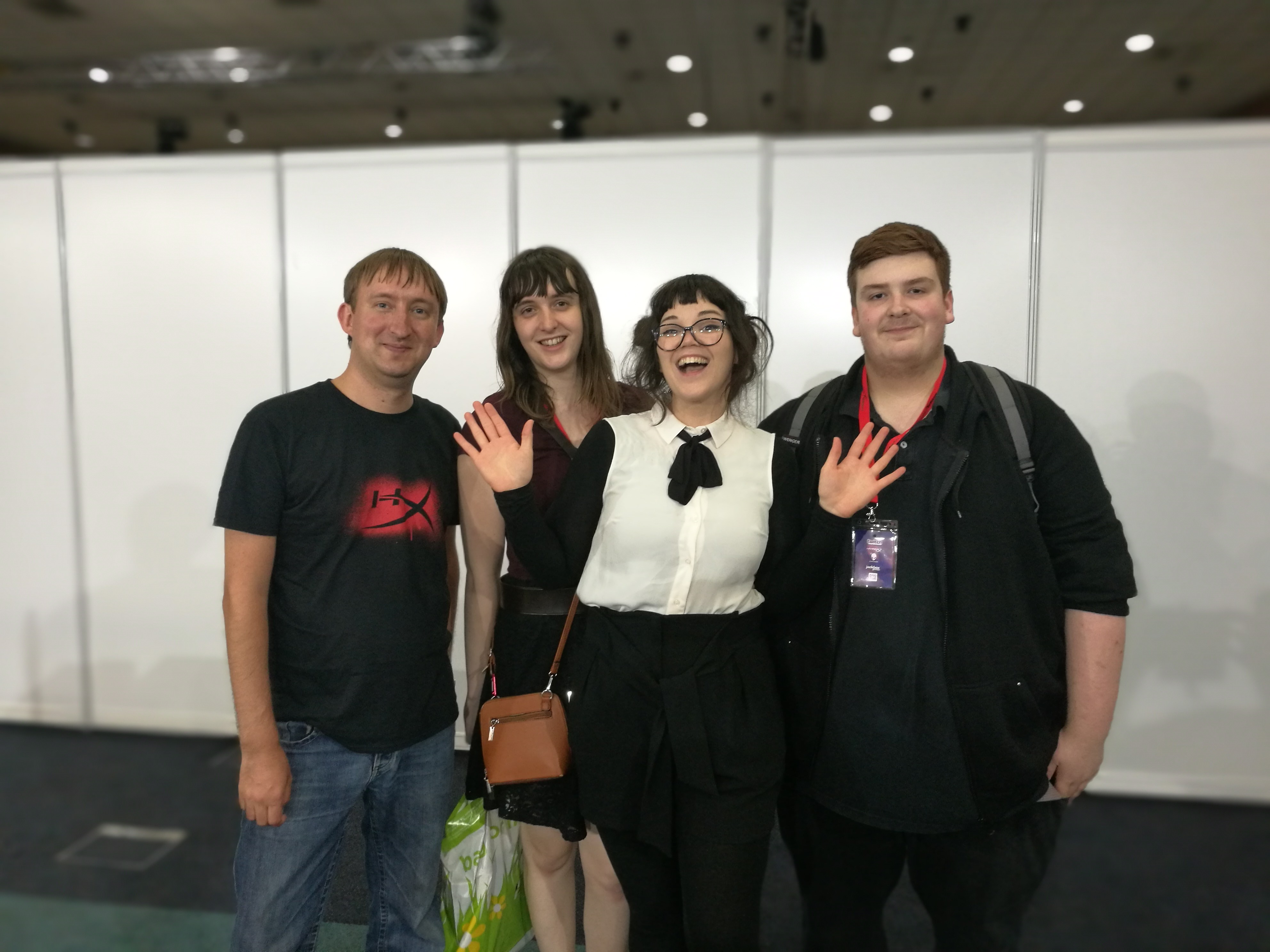 Our team really pulled its weight – more engaging than ever, and leaving a real impression on this convention.

And last but not least, we wanted to thank Jesse Cox and the CoxCon organizers.  Jesse has always been a huge supporter of the Guns of Icarus franchise, and CoxCon will always have a special place in our hearts.

Thank you to everyone who came by and said hello! – We’ll be back!